President Mike Metroka (WB8BZK) called the September 2020  meeting to order at 7:01 PM.  The Pledge of Allegiance was led by Dave Holmgren (K9AT).

A total of 37 members were in attendance.

The meeting minutes from the August 2020 meeting were previously posted to the MCWA website for review.  Gary Dembski (W9GD) motioned to approve the minutes with Dave Whaley (NT9E) seconding the motion. The motion was approved by voice vote.

Dean Hettel (WD9FOO) presented the membership and financial reports for June.  As of August 31, 2020, MCWA has a membership of 128 members,  127 full members and 1 associate member.

Joe Robin (N9OK) made a motion to approve the financial report with a second by Dennis Ryan (KA9PUC) . The motion was approved by voice vote.

The first ever QSO Today Virtual Ham Convention was held the weekend of August 8 – 9 with the opening keynote on Friday evening. Several members attended and thought many of the programs worthwhile. Some elements of the interface and experience felt clumsy.

The Racine Megacyle Club’s Free Fest on August 8 wasn’t attended by anyone at the meeting.

The Society of Midwest Contesters (SMC) Fest  occurred on August 22nd and was enjoyed by a number of members. Initially limited to current paid SMC members, the virtual event was later opened up to all. 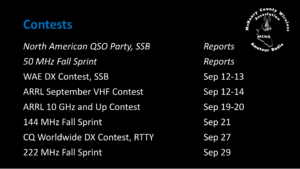 The dinner social which has been held at the Village Squire in Crystal Lake the past two years and takes the place of the November meeting has been postponed until 2021. Based on the number of members who attended the previous two dinners, it was not  possible to safely accommodate the large number of people at this time.  There will be a virtual meeting in November.

Craig Thompson (K9CT) of Trivoli, IL completed the Fred Fish Memorial Award, which requires confirmed QSOs with each of the 488 Maidenhead grids within the continental United States on 6m. Craig is only the 12th operator to have achieved this impressive accomplishment. Congratulations, Craig! 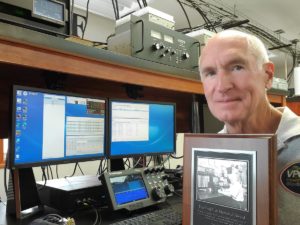 There was no old business.

Mike Salak (KC9Q) brought up the recently announced FCC Notice of Proposed Rule Making that proposes to establish a $50 fee for new licenses, upgrades, renewals, and vanity call signs.  Administrative changes such as address changes would be free.

A discussion followed where members expressed their views on the new license fees: “It will have an impact on new people entering the hobby”, “Disincentive licensing”, “Maybe it would discourage callsign hoppers from frequently changing calls causing their old call to be unavailable to others for two years”. A number of members thought that a $50 or more fee would be  detrimental or a barrier for many. For example, someone passes the Technician, upgrades to General, and applies for a vanity callsign will pay $150. The fee could result in fewer people entering into the hobby at time when the  amateur community is aging.

A suggestion was made for club members to file comments with the FCC once the request for comments notice is announced. More information can be found on the ARRL website (http://www.arrl.org/news/fcc-proposes-to-reinstate-amateur-radio-service-fees).

Dave Whaley (NT9E) asked if there was any progress securing a larger meeting place for in-person meetings. The Board has been compiling a list of potential venues and will be reviewing them for suitability. There are a number of factors that must be considered including size, location, cost, and venue availability during the pandemic.

Mike Metroka (WB8BZK) said that after three years as President and two as Vice President, it was time to turn the reigns over to someone else.  The candidates as presented by the Nomination Committee for the 2020-2021 officers and directors are:

The floor was opened for additional nominations. There were no further nominations. Dennis Ryan (KA9PUC) moved that the nominations be closed and that the list of candidates be accepted. The motion was seconded by Harold Burt (W9HB) and passed by voice vote.

Jim McDonald (N7US) and Fred Soop (AC9RQ) asked if there was a quorum present to hold an election and what would happen if an election couldn’t be held for that reason? A short discussion ensued with President Mike Metroka (WB8BZK) stating that in lieu of a lack of nominations from the floor, a vote would not be necessary as the unopposed candidates would be considered elected via acclamation.  There were no objections from those present and the slate was elected by acclamation.

Congratulations were extended to the new Board of Directors, who will be seated at the October meeting. John Dewey (KA9CAR) current Past President will be leaving the Board and replaced by Mike Metroka (WB8BZK). Mike Salak (KC9Q) will begin his second year as Director.

The program for the evening will be “Building & Testing the SATNOGS Rotor” presented by Ralph Iden (WB9ICF), which begins immediately following meeting adjournment.

A motion to adjourn was made by John Kalenowsky (K9JK) and seconded by Dave Whaley (NT9E). The motion was approved by voice vote and the meeting was adjourned at 7:42 PM.

Before starting the evening’s program, it was revealed that Mike (WB8BZK)  received a surprise visit from John (KA9CAR) and Gary (W9GD) earlier in the evening who presented him with a plaque expressing the club’s appreciation of his service as President the past three years and Vice President the two prior years. Thank you, Mike from MCWA. 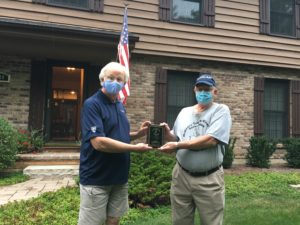