President Mike Metroka WB8BZK called the August 2020  meeting to order at 7:02 PM.  The Pledge of Allegiance was led by Tom Craner KD6KHK .

A total of 31 members were in attendance.

The meeting minutes from the July 2020 meeting were previously posted to the MCWA website for review.  Dennis Ryan KA9PUC motioned to approve the minutes with Gary Dembski W9GD seconding the motion. The motion was approved by voice acclamation.

Dean Hettel WD9FOO presented the membership and financial reports for June.  As of July 31, 2020, MCWA has a membership of 126 members,  125 full members and 1 associate member.

A motion to approve the financial report was made by Tom Craner KD6KHK with a second by Joe Robin N9OK. The motion was approved by voice vote.

A few members attended the DX Engineering Virtual Hamfest including N7US and WB8BZK who thought the presentation by Jerry Rosalius WB9Z was great.

The first ever QSO Today Virtual Ham Convention will be held the weekend of August 8 – 9 with the opening keynote on Friday evening.

The Society of Midwest Contesters (SMC) will be holding their SMC Fest on August 22, 2020 via Zoom.  At the present time, attendance is limited to current paid SMC members.

As reported previously, the W9DXCC – NIDXA DX Convention has been canceled.

A reminder that the scheduled August 18th VE testing in Woodstock has been canceled due to the COVID pandemic, however there are alternatives.

The North American QSO Party RTTY was enjoyed by Mike Metroka WB8BZK as well as Jim McDonald N7US, who made 543 contacts.

The ARRL 222 MHz and Up Distance contest saw John Kalenowsky K9JK have his personal best score. He visited four grids and made contacts on several bands including 3.4 GHz and 10 GHz.

The club’s Field Day at Rush Creek Conservation Center in Harvard was a resounding success and resulted in the highest score since the club restarted its Field Day activities. Safety measures to guard against COVID-19 were put into place and the weather cooperated this year.

Here are this year’s statistics along with previous year totals. 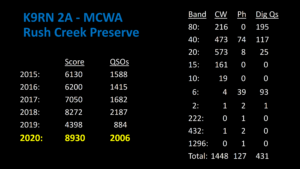 Congratulations to all of the MCWA members who participated in our Alternative Field Day activity. Your scores will be affiliated with the club’s FD score. The final results are in. 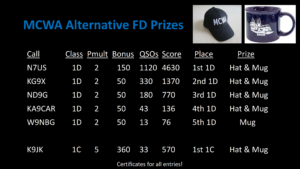 Dave Whaley NT9E reported on the 415 Field Day.  They operated 3A under the callsign N9WH. One of the stations was plagued by interference in the trailer due to coiled cables and  software problems were experienced out of the gate. A total of 14 operators participated with a total score of 3264.

John Dewey KA9CAR gave a report on the K9ESV FD site. They operated 2F from two office-type trailers using a 3 element beam and wire antennas. The scores were similar to prior years.

Rick Dickens KY0Q, as he has done the past 6-7 years, operated from a tent running QRP CW on battery. He normally pairs up with Olaf Nurmepuu W9FY for this annual event, but the COVID-19 pandemic interfered with their plans. He said working QRP was kind of tough, but managed to make 435 CW contacts.

The Nomination Committee chairperson, Jim McDonald N7US, presented the committee’s slate of candidates for the MCWA 2021 Officers and Directors.  A brief biography was given to acquaint the membership with the candidates.

The slate will be presented once again at the September meeting and members will be given the opportunity to nominate additional members from the floor prior to the vote.  Any additional nominees need to be present to affirm that they will accept the nomination.

In addition, Mike Metroka WB8BZK will serve as Past President and Mike Salak KC9Q will begin his second year as Director.

The club still needs a nominee for club Secretary. Beside taking meeting minutes, the Secretary also handles club correspondence such as sending out sympathy cards for members who have become Silent Keys.  Please consider standing for nomination as the club will need a Secretary. Support and guidance will be provided so you will not be overwhelmed. Please contact Jim McDonald N7US if you will be willing to serve the club in this capacity.

It is important that all members attend the September meeting in order to vote for next year’s officers and directors. If there are no contested positions, then a simple acclamation vote will be taken. Otherwise, an online election will be held using Election Runner, a secure voting system.  The meeting will go into executive session while members vote. When the meeting is reconvened, the election results will be reported to the club. The time frame for online voting, if necessary, will be announced at the September meeting.

As a voting member who intends to vote electronically, it is crucial that you have a valid email address on file as this will be the means to deliver the link to the ballot.  By default, that is the email address associated with the reflector.  If a member is not registered on the K9RN reflector or has two or more addresses on file, please let Dean Hettel WD9FOO know your preferred email address. Each voting member will be able to cast one vote for each office.

No new business was presented.

The program for the evening will be “So You’d Like To Run A Repeater – Hints & Tips”, presented by Ken Farver KB9I, which will begin immediately following meeting adjournment.

The next regular meeting will be a virtual Zoom meeting on Tuesday, September 1st, 2020.  This meeting will elect next year’s Board of Directors so all members are strongly encouraged to attend. The meeting program that evening will be “Building & Testing the SATNOGS Rotor” by Ralph Iden, WB9ICF.  Members watch your email for your meeting invitation.  The meeting will open around 6:20 PM to allow new users to join and the meeting will commence at 7:00 PM.

A motion to adjourn was made by Roger Scott KF9D and seconded by Joe Robin N9OK. The motion was approved by voice vote and the meeting was adjourned at 7:59 PM.