President Mike Metroka WB8BZK called the January 2020 meeting to order at 7:00 PM in the Crystal Lake Bank meeting room. The Pledge of Allegiance was led by Dave Holmgren K9AT.

The meeting minutes from the December 2019 meeting were previously posted to the MCWA website for review. A motion to approve the minutes was made by Mike Pecorini KD2RPE with a second by Dave Whaley NT9E. The motion was approved by unanimous vote.

Treasurer Dean Hettel WD9FOO presented the membership and financial reports as of December 31, 2019. MCWA has a membership of 120 full members and 10 family members for a total of 130.

Doug Mather KD9PK motioned to approve the financial report and was seconded by Joe Robin N9OK. The motion was approved by voice vote.

Membership dues for the upcoming year are $10 and are now payable. If you haven’t yet renewed your membership, please contact our treasurer Dean Hettel WD9FOO to remit the $10 or send the $10 via PayPal. If you would like to pay via PayPal, contact Dean for the details.

MCWA is sad to report the passing of Henry “Hank” Schumacher KB9ASC on January 2, 2020. Hank was a decorated Vietnam veteran, devoted family man, and long-time member. A moment of silence was offered in remembrance.

The Motorola Solutions Foundation, in recognition of the volunteer work performed by Joe Robin N9OK on behalf of the foundation, made a $150 donation to an organization of Joe’s choosing.

Harold Burt W9HB brought several CW keys and offered them free for the taking for anyone attending the meeting that night.

Congratulations to the following for receiving these recent awards:

The Federal Communications Commission (FCC) in December has formally adopted its Notice of Proposed Rulemaking that would remove the existing non-federal allocations in the 3.3-3.55 GHz band, which includes the entire amateur radio allocation. The FCC cited the need to make this spectrum available to support the next generation of wireless networks (5G). The loss of this allocation will be most felt by amateurs who have invested a great deal of money in equipment and antennas and wide-area mesh networks.

Building upon the success of the recent scouting activities, especially the Morse sending stations at last fall’s scout camporee, JoAnne Maenpaa K9JKM presented her thoughts on attracting youth to amateur radio. Amateur radio is competing for attention with other activities. Ways to present the hobby in an exciting and engaging manner will be required for success.

Observing the scouts engaged with the Morse CW sending station shows that presenting our hobby in a novel way will engage and hold their interest. Taking elements of technology already familiar (e.g., computer games, color graphics, mouse, etc.) and applying them in a low cost Amateur radio context could appeal to them. 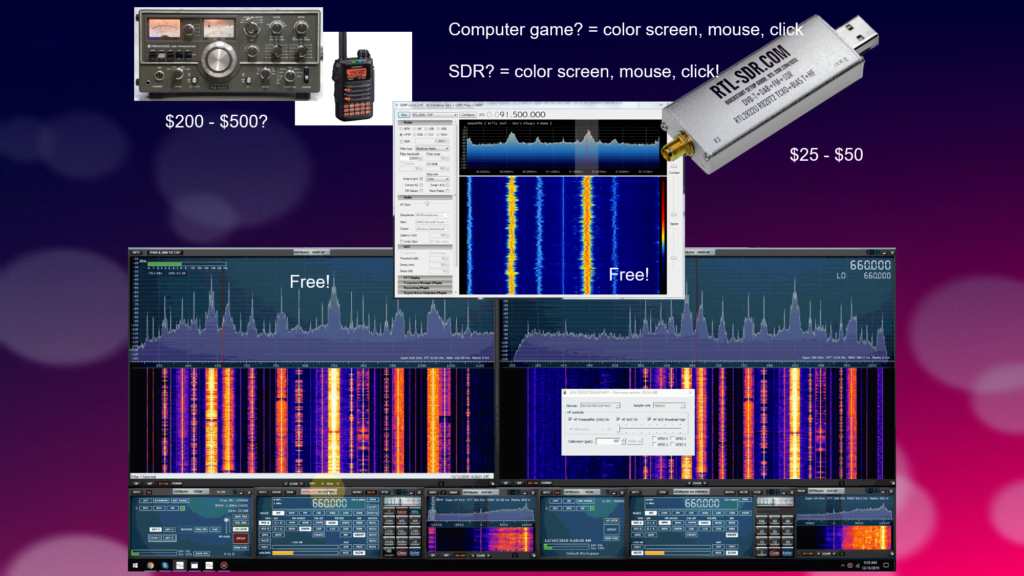 JoAnne and other interested members will continue to explore and discuss this idea with the goal to developing follow-up activities for future scouting events.

The WARAC Midwinter Swapfest was held on Saturday, January 4, 2020 in Waukesha, WI. Several members attended and reported that it was well attended but crowded and too many stairs. There was a nice selection of equipment for sale or trade.

WCRA will host their Mid-Winter Hamfest in St. Charles at the Kane County Fairgrounds Expo Center on Sunday, January 19, 2020.

Winterfest 2020 will be held on January 25, 2020 from 8 AM – 4 PM at the Gateway Convention Center, Collinsville, IL (near St. Louis). Reports are that this is a good hamfest and a few members may carpool or caravan to attend.

Our members have a wealth of knowledge and experience that other members are eager to receive. There are some great programs coming up the first part of the year. Would you consider sharing your knowledge and present a talk at an upcoming meeting later this year?

Ralph Iden WB9ICF gave a brief report on the status of the MCWA website.

Ken Farver KB9I and Mike Ricketts ND9G have been serving as webmasters. Mike has been performing most of the day-to-day updates (announcements, posting of minutes, etc.) and he contacted the Board and said that he will be stepping down from that role due to other commitments.

Ralph expressed his thanks to Mike, explaining that maintaining a website is not easy and all present extended their appreciation by giving Mike a round of applause. For the interim, Ralph will be assuming the day-to-day updating of the website. Ken will remain in his role as webmaster.

Last month, Mike Pecorini KD2RPE raised the point that the website really could use an update. During the holiday break, Mike (KD2RPE) and Ralph developed a prototype of a new website that could replace the existing one. The new site, based on WordPress, would incorporate many elements that would be difficult and time-consuming to implement on the existing static HTML website.

Mike and Ralph presented the prototype to the Board for review on January 6th. It was favorabily received and a green light was given to continue work on the project. Several good suggestions were offered during the meeting and Mike is giving consideration to them during the development phase. The new website is planned for release in the first quarter of this year. More detailed information will be shared with the club at the February meeting.

Ken Field KO9H raised his concerns about the low number of people responding to last year’s call for Field Day participation and having two Field Day operations the past two years. When he asked where everyone was, someone said that they were “with the other group.”

He apologized for the tone of his remarks on the reflector explaining that he doesn’t like divisions in the club and would like to see everyone get along with each other. If someone is rubbing people the wrong way, life is too short for it to be the cause for a rift in the organization. Coming together will provide a fair chance for everyone.

In the discussion that followed, a member thought that this might be some type of misunderstanding and another thought it was more of a timing issue as the club started its FD preparations late. It was noted that in the Field Day recap, there were six (?) groups reporting, and all had a good experience. MCWA has performed very well the past two years finishing near the top even with a shorter operating window due to the bad weather last year.

It is generally agreed that the “other group” is not an exclusive secret society at odds with MCWA and everyone, regardless of where they operate FD (or not operate at all) is committed to the continued success of MCWA as an organization. A member who joined MCWA last year confirmed that this has been his experience.

The Board of Directors approved the formation of a Field Day committee with a budget contingent upon a chairperson stepping up. As of this meeting, no one has stepped up, but the request for a chairperson and volunteers for the other approved committees will be repeated at the February meeting.

Ken said that he would volunteer to be the Field Day chairperson if there was enough interest to form a committee. He asked for a showing of hands of those who would be interested in a MCWA Field Day and it was estimated that a third of those in room raised their hands. With a FD chairperson and a good showing of hands, Ken will be following up with planning.

The discussion concluded with President Mike Metroka WB8BZK saying that if there a disagreement or conflict between a member or members, reach out directly to them to discuss the issue. Often the conflict can be resolved by clearing up any misunderstandings and intent.

An invitation to interested parties to gather later at The Cottage to enjoy eyeball QSOs and 1/2 price pizza was offered.

Jack Hudson W9MU will be presenting “History of Electricity and Electrical Technology” following the adjournment of tonight’s meeting.

The next regular meeting will be Tuesday, February 4th. 2020 in the Crystal Lake Bank meeting room. Doors open at 6:30 PM, with the meeting starting at 7:00 PM.

A motion to adjourn was made by Doug Mather KD9PK and seconded by Joe Szczubelek K9DMV. The motion was approved by voice vote and the meeting was adjourned at 8:03 PM.