A big thank you for everyone who stopped by our exhibit at the Make Faire Lake County 2022 on April 9th. Here are the details on the projects that were shown at the Faire.

Morse Code was used to send messages over telegraph wires connecting the nation. When Marconi was developing wireless communications, messages were sent using Morse and the 120th anniversary of the first transatlantic transmission using Morse Code was recently celebrated.

Ship’s wireless radios, including the one on the Titanic, communicated with other ships and the mainland using Morse Code. Almost everyone knows what SOS  … — …  means, Save Our Ship or Save Our Souls, an international distress call..

Although Morse Code has been replaced with newer methods of communication, it remains popular with the amateur radio community and is enjoying a resurgence due to its novelty and the ability to make contacts in weak signal situations where voice communications would be difficult.

Those who have been licensed for decades had to learn Morse Code and demonstrate proficiency in front of a Federal Communications Commission examiner. When many of us learned the code, there were limited resources to learn the characters in an efficient manner and to practice. The Morse Tutor was conceived to fill those needs in the 21st century.

Morse Tutor trains the student to recognize the characters using sound and not by translating the sounds into dots and dashes and then into the character. This means that the brain doesn’t need to make that intermediate step and proficiency increases more rapidly.

Morse Tutor is an ESP-32 based project with a either a 2.8″ or 3.2″ color screen whose features are focused towards teaching Morse Code and providing receiving and sending practice. The Morse Tutor contains a WiFi radio that allows multiple units to connect to each other allowing students to practice with each other.

The student is led through a learning process using the Koch method where the student is exposed to two characters at a time until they can be recognized by ear. Other features include an echo game, listening to random words, numbers, callsigns, sample QSOs (contacts with another amateurs), and playing text files in Morse Code. There are freeform and echo activities to give the student opportunities to improve their sending skills.

As with many projects, they are the result of building upon the work of others. In the case of Morse Tutor, it was originally conceived by Jack Purdum (W8TEE) and further refined by Bruce Hall (W8BH) and others. Our contributions were minor code and hardware changes with additional features currently in the testing phase.

There are only a few components used which makes the unit easy to build and inexpensive. Although the unit can be powered in a number of ways, a USB port is used to power the Morse Tutor and provides the means for a computer to communicate with the unit and to update the firmware on the chip.

Using the ESP-32 v2B PCB layout, ten double-sided boards were manufactured by JLCPCB at the cost of $5.00 plus shipping via DHL air. While waiting for the boards to arrive, the other parts were ordered from Amazon and Digikey. The boards arrived within a week (six days from placing the order to the doorstep) as well as the other parts.

The headers and the rest of the parts were quickly installed and a 10uF capacitor was connected from the ESP32’s EN line and ground. Some ESP-32 boards will automatically switch to programming mode when the Arduino starts to send the program and others require pressing a certain button sequence. The capacitor eliminates the need for pressing the button sequence for those boards that don’t automatically switch to programming mode. 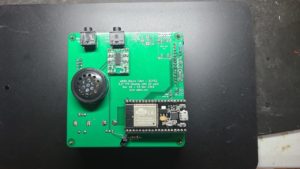 A 3D printed snap on enclosure was designed using OpenSCAD.  Unlike Fusion 360 or TinkerCAD, OpenSCAD is a programmatic modeling software which appeals to me (Ralph) as a software developer.

Let’s power it up and enter QSO receive mode.

A second project for the Maker Faire was a simple code practice oscillator with an built in key. The printed circuit board was custom designed and then manufacture by JLCPCB. Fifty units were made and given to visitors that showed an interest in Morse Code.

A big thank you to Sam (KC9GPY) for his assistance assembling the units along with Ralph (WB9ICF).